In the past months I have spent the evenings and weekends on a little project: a JPEG decoder and encoder, written in Rust.

First, I should drop a little disclaimer: at the time I’m writing this post, I have successfully decoded multiple test images, but these are fairly standard type images, so more exotic and advanced parts of the JPEG and JFIF standard are yet to be implemented properly, or even at all. Therefore, current program design decisions, as well as explanations of formats and techniques, may be executed poorly, as they are based on what I currently know, and the subset of functionality I have implemented. Hopefully, I am not too far off.

When I started working on this project, I had not decided how this post should be. Should it be a step-by-step kind of guide, or more of a writeup of a working program? Initially, I wanted the former, but I changed my mind as I was progressing, because I struggeled with understanding how the decoding process worked, which lead to strange design decisions, commits going back and fourth, and weird naming conventions. I do not believe this process would make a pleasant reading experience for anyone. Instead I want to write a post on how it has turned out so far. This first post will cover the background needed to understand this mess that is JPEG.

But first, why am I writing this? The choice of writing a JPEG encoder/decoder is somewhat arbitrary. In fact, if I knew what I know now, I think I would have chosen a different format than JPEG. This is mostly because this was supposed to be a weekend, or maybe weeklong, project; as I’m writing this, there is approximately five weeks since the initial git commit1.

The choice of using Rust, however, is not arbitrary. I have found Rust to be an expressive, performant, and fun language to use; it allows high level abstractions and patterns, while still keeping that raw, low-level feeling you get from e.g C. I guess the project of writing a JPEG encoder/decoder was a great excuse for writing a non-trivial program in Rust.

And as always, I want to improve my writing. Writing is hard! Feedback is of course very welcome, even though there is no comment section here.

Let us look a little closer on JPEG.

JPEG is a method for lossy image compression; it is not2, as you might believe, an image format. There are however image formats which use JPEG, such as JPEG/Exif — this is what your digital camera spits out (unless you are only capturing RAW) — and JPEG/JFIF — the file format we will work with. JFIF3 is the most common format of transmitting images on the web4. This is great knowledge to pull out when someone says “JPEG file” or something similiar: “Uhmm, actually … “5.

Let’s see how a JFIF file is laid out, and then what the JPEG data format looks like.

Apart from actual image data, the JFIF file contains data such as image dimensions, comment, different tables, and more. A JFIF file consists of segments. Each segment contains a marker, a length, and data. The marker is two bytes, and is used to identify the segment. The length is two bytes, and specifies how long the segment is, excluding the marker bytes, but including the length bytes. The data fills the rest of the segment, according to the length.

For instance, the marker for “Comment” is 0xfffe, making the bytes for specifying “Hello, World!” as a comment:

The format of the data varies with the different segment types. When implementing the decoder6, I simply read parts of the JPEG specification, which is available here (pdf). See page 38 (marked as page 34) for an overview of the format. The format of different markers follow for the next 13 pages.

There is no need to go into too much detail just yet. We can simply start with saying that an image consists of a frame, which again consists of one or more scans. Each scan contains one or more entropy-coded segments (ECS). So far, the images I have tested have contained one frame, one scan, and one ECS, which is a good starting point. Complexity does not always have to be payed for up front.

Let’s have a look at the image data — this is after all the most exciting part.

In essence, this is how JPEG encoding works:7

In order to understand why we are doing this, we need to take a closer look at frequency transforms, and huffman coding.

The Discrete Cosine Transform(DCT) creates a representation of a signal as a sum of cosines of different amplitude and frequency. I do not feel I am able to explain this good enough, but you are encouraged to look at the Wikipedia page for Fourier Series, which contains some great animation and images; for our use, DCT is basically the same thing. If this went over your head, do not worry. Understanding exactly how it works is not as important as understanding why we would like to use it.

So what does DCT have to do with images? Instead of looking at an image as a grid of pixels, we can interpret the image as a two dimentional signal. For instance, say we have a grayscale image of size 8x1 px, and that the image data, where each pixel is a number between 0 (black) and 255 (white), looks like this:

We can interpret this image as mathematical function; in this case it is rather easy: $f(x,y) = 32x$. So how does the DCT of this signal look? Like this:

If we go backwards, using the inverse DCT, we get the exact same image data as the ones we fed into the DCT; no information is lost. This does not look too impressive; sure — we got some zeroes here and there, but there seems to still be some data which needs to be saved. What if we increase our image to be 8x8, instead of 8x1? 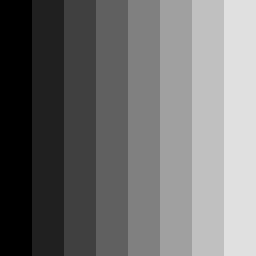 Now it is clear that for some images — or image blocks — there are great opportunities to minimize the size of the encoded data. There are even more tricks to this, such as quantization, which we will have a look at later.

Quantization is applied after DCT, and is used to reduce the information of the coefficients in every image block. By making almost equal numbers equal, we decrease the number of unique numbers, and increase the compression ratio enabled by huffman conding.

Let us predend blocks are 2x2 instead of 8x8. Say the data we got back from the DTC is

A quantization matrix could be

And we are done. The data from $B$ is what is passed down to the next step.

We can also see that if we are going the other way, taking the inner product, with the same quantization matrix, we get

So we found a way to represent our image block with a lot of similar numbers — 0 in our case. How can we take advantage of this? If we use 32 bit integers, the size of the number is 32 bits, no matter the number! Or is it?

Huffman Coding is a coding scheme used for lossless coding. The gist of the scheme is to code numbers as bit strings, with the property that no code can be the prefix of another code (if 01 is a code, 011 can not be a code), and that frequent numbers should have a shorter code than less frequent numbers.

Say we want to encode this (totally random) list of bytes

We can count the number of occurences of each number in the list,

and create the codes9,

Effectively, we coded 10 bytes as 3 bytes10 11, by taking advanage of the fact that some numbers are more frequent than others.

Now that we have some control over roughly what happens, we can take another look at the whole procedure, with some additional steps.

So, we split the image into blocks, and each block is more or less processed by itself. This is done because of the principle of locality: pixels within a block are likely to be somewhat similar.

Next, we transform the image into frequency domain, so we can make it easier to encode the numbers. Then, we reorder the blocks, with the goal of getting long runs of zeroes. We also take the inner division (element-by-element division) of our frequencies and a quantization matrix, in order to make the coefficients somewhat similar. This is the lossy part. At last, we use huffman coding to write out the image data, taking advantage of the fact that we are writing lots of similiar numbers.

We have looked at how a JFIF file looks like, and roughly how the image data is encoded. In Part 2 we will start implementing this, in actual, runnable, (hopefully) working, Rust code.

If you found some things confusing, or simply want better explanations than I can give, check of the Wiki page for JPEG; it explains the encoding process using a 8x8 sample block.

This work is licensed under a Creative Commons Attribution-ShareAlike 4.0 International License